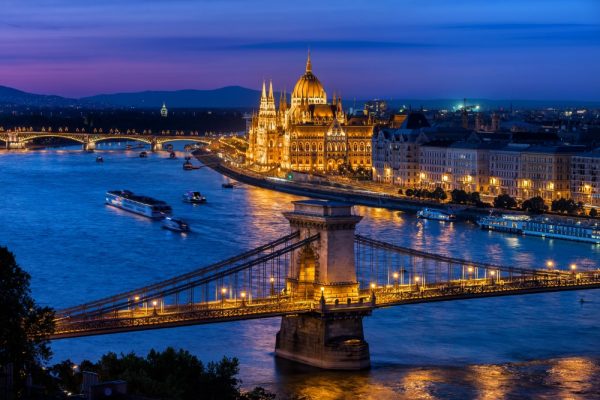 Forget the “Little Paris” moniker that has haunted Budapest for decades. The majestic capital of Hungary, from the wooded and sedate hills of Buda with its old town and royal castle, to the buzzing ruin bars, grand palaces and shopping streets of downtown Pest across the broad Danube that divides the city, is so much more than just another pretty central European city. Here contemporary cool and old-school grandeur mix effortlessly, and all with a distinctly Hungarian flavour. To use another tired phrase, here there is something for everyone, whether you want to admire the most astonishing art nouveau and secessionist architecture in Europe, party all night at a grand 19th-century thermal bath, sip cocktails on a rooftop bar or eat dinner while cruising down the moonlit Danube. And with several exceptional hotels opened in the last couple of years, you may just find yourself falling in love.

What is the best part of Budapest to stay in?

While the Buda side of the Danube may be the smartest part of town for wealthy residents looking for peace and quiet, Pest is where the action is and is packed with historical buildings and great places to eat, drink, shop and stroll and this selection of the best new openings and old classics for you to lay your head down to rest in concentrates on the central Pest districts, where reaching the central landmarks is easy.

One of a matching pair of neo-Baroque fin de siècle palaces built on the orders of Princess Clotilde of Saxe-Coburg and Gotha, the wife of Archduke Joseph Karl, and protected by UNESCO, the Matild Palace, which opened just last year, is an exceptional addition to the Budapest hotel scene that marries award-winning contemporary design with beautifully restored heritage elements. Home to the first Spago restaurant by Wolfgang Puck in Europe, already recommended for a Michelin star, the Matild also features a rooftop bar with panoramic views, and from the autumn its beautiful galleried, Art Nouveau café, will, in a first for contemporary Budapest hotels, be hosting cabaret performances. Rooms have soaring four-metre ceilings, herringbone parquet flooring and contemporary furnishings that combine sumptuous bursts of rich colour with high taste. For a unique experience book the extraordinary three-storey tower suite, with 360-degree views of Budapest and the Danube that will stay with you.

An expression of the golden age of early-20th century Budapest in stained glass, ceramics and endlessly intricate patterns and sculptural details, the vertiginous and breath-taking atrium of the Párisi Udvar or Parisian Court is a masterpiece of art nouveau extravagance that was reopened to the public as a luxury hotel in 2019 after over 85,000 hours of painstaking restoration work. Rooms are a model of restrained modern elegance mixed with classical lines, where cool colours provide respite from the riot of detail of the historic building’s public areas. In the evening, the hotel’s café transforms into a champagne bar offering over fifty bottles, with 20 available by the glass and when you are suitably infused with bubbles, Lajos Lutz’s Brasserie offers faithful and delicious Hungarian specialities and brasserie classics with wine pairings. Or, for the more adventurous, just step outside to find yourself in the very centre of Budapest’s pedestrian central shopping and tourist district.

The Kozmo, which opened just last year in what was in the 1920s Europe’s second-largest telecommunications centre, is a hit for lovers of contemporary design. On a leafy square just outside Budapest’s Palace District and within walking distance of the Dohány Street Synagogue and Great Market Hall, behind the hotel’s façade with its original 1920s monumental sculptural reliefs guests discover a contemporary haven of spacious, beautifully designed spaces. The tallest building in the area, expansive terraces furnished with sofas to sprawl on offer panoramic views of the tiled rooftops of Budapest from the hotel’s many suites, where glass, black metal and crisp whites, greys and cool blues are married with warm parquet floors and toe-warming, thick cream rugs. From mid-autumn 2022 this new addition to the Luxury Hotels of the World collection will be opening its oyster and Champagne bar, but if you get there sooner, the elegant courtyard bistro provides an enchanting ambience for intimate and delicious encounters.

Named for the founder of London’s Royal Exchange and originally built for the London-based Gresham Life Assurance Company as their headquarters, the Gresham Palace is the hotel that set and continues to maintain the gold standard for the restoration and conversion of historical Budapest buildings into opulent hotels. Opened in 2004 after a $110-million restoration and considered one of the finest examples of Art Nouveau architecture worldwide, the hotel occupies an enviable position by the landmark Chain Bridge, with views from rooms of the Danube and the Buda hills, old town, and castle beyond. A repeated motif of the building’s interiors is a love heart, reputedly because the original designer was in love when he created his masterpiece; and this love is reflected in the attention to detail of the modern-day hotel, from the exquisite Múzsa cocktail bar to the refined and elegant rooms and suites.

Just one hundred metres from the towering cupola of St. Stephen’s Basilica and arranged around a glass-roofed 19th-century courtyard, the Aria Hotel is hands-down the place for music-lovers in Budapest. Placido Domingo, Lennie Kravitz and Rita Ora are amongst the hotel’s regular visitors, and the walls of the Mirror Bar are covered in the signatures of other famous musical guests. The four musically themed wings contain forty-nine rooms, either with private terraces onto the courtyard, or views of the elegant surrounding streets. Each room is inspired by an individual composer or musician, decorated with fabulous original art by Czech caricaturist Josef Blecha, and has its own marble fireplace, with décor ranging from the voluptuous and extravagant purples of the opera wing to the more restrained palette and lines of the classical wing. After a day of sightseeing guests can unwind each day from 4-6pm over complimentary cheese and wine in the courtyard to the accompaniment of live music.

Among the first international hotels to open in Budapest, the Kempinski Hotel Corvinus celebrates 30 years in September 2022, and a testament to its appeal are the many staff members who have been there since its debut. Unlike newer hotels that have made their home in exquisitely restored period buildings, the Kempinski is purpose-built, but its curving interior shapes filled with the hotel’s Hungarian art collection and redesigned by London-based MKV Design in 2013, who are also responsible for the Matild Palace’s sublime reincarnation, still feel contemporary. For dining, guests can choose from the hotel’s signature ÉS Bisztró for Hungarian classics and specialities from the grill, Asian fusion from Nobu or four more restaurants, bars, and cafes, while Budapest’s iconic shopping street, Fashion Street is just a step away. Recently renovated rooms with cool, contemporary colours and brass, gold, and rich wood accents look out onto the Budapest Eye and beyond it, the dome of St. Stephen’s Basilica.

Just across the boulevard ring from the buzzing party district, muscular stone atlases support the grand entrance porch from Budapest’s busy downtown. This leads, via a circular lobby of honey-coloured columns, into the cool, calm, classical harmony of the five-storey collonaded white-marble-paved courtyard that the New York Palace is centred about. A gem of the Budapest Belle Époque, the hotel is best-known for the fabulous excess of Rococo columns, chandeliers and frescoed ceilings that is its New York Café. Here, guests can enjoy a truly exceptional breakfast in a private section of what is often called the most beautiful café in the world. Rooms are comfortable and well-appointed and from autumn 2022, guests will be able to enjoy a totally renovated spa and wellness centre with echoes of the whitewashed walls of the Greek archipelago, and a new restaurant offering individual dining experiences set high on a gallery overlooking the riotous splendour of the New York Café.

Of all the hotels in this list, the Corinthia is the only one, bar the Kempinski, that began its existence as a hotel. The Grand Hotel Royal Budapest, as it was called, in its heyday of the early 20th century hosted stars such as Josephine Baker, who performed in the hotel’s Orfeum cabaret. It has served more recently as the inspiration for Wes Anderson’s Oscar-winning The Grand Budapest Hotel. A vast establishment created from three adjacent 19th century buildings with the original side-streets between them transformed into lofty glassed atriums, the Corinthia is perhaps most famed for its beautifully restored Royal Spa. The spa was originally opened in 1888, and was saved from the ignominious fate of being converted into a multi-storey carpark. Guests can swim or bask in saunas and hot-tubs surrounded by columns and period tilework. Equally impressive is the huge cream and gilded ballroom, once the venue of Budapest’s first cinema. For gourmets, the hotel has two fine-dining restaurants.